The calm during the storm. It’s after the storm that the ice-picks come out.

I hate snow because it brings out the very worst in people.  Snowfall makes me edgy with anger at this time of year when everyone is preaching “Good will toward men” and “peace on earth”—words that mean nothing in a blizzard.  There is barely any time to appreciate the beauty of a wintry snowfall before the ugliness of people start to reveal themselves.  Once the snow starts falling, it’s every man and woman for themselves, whether it be on the road or in the subway, and I can’t even count the number of times I said the words “you’ll probably have to punch a baby” yesterday.  (No, I don’t REALLY think that you should punch babies.  Hyperbole…yet shockingly close to reality.)

Now, I’m about to introduce a controversial BOSTON topic, and there are many of you that are NOT going to agree with me, and so be it, you think you deserve what you worked for.  But I’m here to tell you that deserve is an ugly word, and if as many people as possible worked for greater good, then maybe snow could be beautiful again.

NOTHING MAKES ME MORE ANGRY THAN PARKING SPACE SAVERS.

For non-Bostonians who don’t know what parking space savers are, here’s a picture of one across the street from my house: 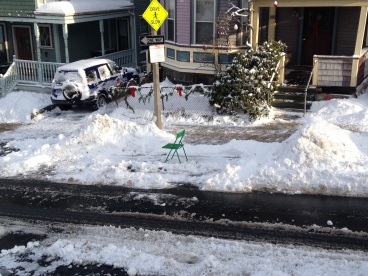 What a lovely green chair…in the middle…of the street. Now my neighbor who saw me take this picture is probably thinking that I called the City on them.

Some other questions that you may have about this strange “tradition”:

Why is there a chair in the middle of the road?  (Or a parking cone, or beach lounger, or trash can, or a tub of kitty litter?) Because the person who shoveled their car from that space seems to think that now they own that space on the street, and that they should be able to park in it when they return home from work hours and hours later.

But isn’t it a public street and a public parking space?  Yes.

What happens if you just move that marker and park there anyways?  It’s not like they own the space.  You should assume that you like your tires slashed, or poop smeared on your car, or your legs broken, or any number of these things.  From Boston.com:

The phone rang at the South Boston police station at 5:11 p.m. Sunday. An unknown suspect had just used an orange nail gun to shoot two nails into each of four tires on a gleaming, white Jeep Grand Cherokee parked on West Fourth Street.

Why do people really think they can get away with this?  Well, I have a few choice quotes, all from emails I have received in the last 24 hours.

Exhibit A, from Neighbor K.D.

In the past, I’ve spent hours shoveling out a space after large storms, being careful to make it completely clear…To have a neighbor who didn’t feel it was necessary to do the same for themselves pull in and and take that space, or one that anyone else cleared, just doesn’t seem fair.  And it sure as hell doesn’t seem “neighborly” to me, either.  And far too often, it’s been someone who uses their cars on weekends or seldom, leaving those of us who have to commute up s***s creek.  Nothing like coming home after 12-hours at the office to find there’s no place to park.  There is absolutely no way the person doing this is unaware of what he/she is doing.

K.D., what happens to the space for the 12 hours that you were at the office?  No one is allowed to park in it?  It would be ok if it were someone who worked the same 12-hour day that you work, commuting by car to do it?  That sure as hell doesn’t seem “neighborly” to me either.

Exhibit B, from Neighbor S.H.

I get out and shovel as well, and I am 76–have lived here my entire life at the end of W*** Street.  I’ve kept barrels in front of my house forever and have never had a problem.  However, I think someone in the neighborhood–someone new who doesn’t know the unwritten “rule” at the end of the street that we honor each others’ parking spaces, called the City.  I had gone out one day at 1:00 and was home at 3:45 and my barrels were GONE!!  I was not a happy camper. I had to go out and spend $30 for two new trash barrels.   My next door neighbor had his taken a week before.  I feel that I should be able to park in front of my house without having someone from down the street parking in front of my house.  I understand that I don’t “own” the parking space, but at my age, I don’t feel as though I should have to find a spot down the street or up on the hill.  I’m always considerate of others and always have been.  I shovel my spot, with the help of a neighbor, right to the curb so the area is nice and clean.  I’ve even shoveled the middle of the street.  Driving down W*** and seeing how people clean out there cars is abominable.  There’d be no problem if everyone was conscientious about shoveling.  K.D., I’m with you–you should be able to park in the spot that you labored over for hours.  It isn’t fair but in today’s world, many people are out there for themselves and to heck with anyone else.

Our plan is to remove any spot savers from the 2 two-hour spots in front of our house.  Ben helps to shovel those spots out anyways, and they are TWO-HOUR SPOTS, meaning that saving them for the 12 hours that you are working (ooh, poor you) is a really shitty thing to do to the rest of everyone living in this neighborhood.  Also, I secretly think that Ben is itching for a broken leg.

In defense of my neighborhood, there have been a few replies that are somewhat sane, like this one from R.S., from before the storms even started:

People seem to be saving spots on the street already.  They haven’t even had to shovel yet to “claim” them.  Seems like we ought not do this.

I really want to respond to these emails but I know better than to feed email trolls.  Even if they are 76 and have lived here their entire life.  Last thing I need is for someone to tell me to go back to the country I came from (like my old neighbor did in our previous neighborhood – he took a spot we shoveled out and then PUT A SAVER IN IT and then told me that).  If that happens, I WILL have to punch a baby.

Massachusetts, and their odd “blue laws” and lawless “traditions”.  I’ve been here over 30 years myself.  Feel free to blast me about space savers and how you worked hard to shovel out your space.  We all make a space for ourselves in this world.  I’m betting that violence and threats are not what keeps your space in life.

This site uses Akismet to reduce spam. Learn how your comment data is processed.

What’s been on my mind

I can haz cookie? #nocookieforyou #tollhousecookies #hopeful #cat
Upgrade your mouse, use cat instead. #nothowanyofthisworks #workingfromhome #productive #cat
Helping #littlebro with schoolwork - yes, I *am* longer than your arm, therefore I *can* swipe you. #scoandbro #tutorcat #sleepingonthejob #schoolathome #cat
Given Muppy’s 5⭐️ rating, I had to stake my own claim on Nana’s bed. #bedandbreakfast #shelterinplace #copycat #cat

All views on this blog are my own opinions, and do not reflect the opinions of my employer(s).

Unauthorized use and/or duplication of this material without express and written permission from this blog’s author and/or owner is strictly prohibited. Excerpts and links may be used, provided that full and clear credit is given to Sheri Ann Cheng and sherianncheng.com with appropriate and specific direction to the original content.

TL; DR - respect and properly credit work that doesn't belong to you, and karma won't come get you.